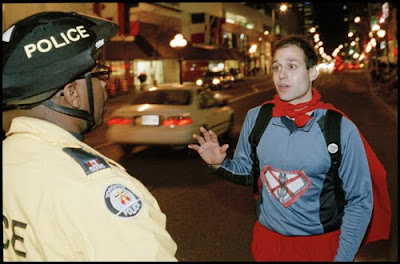 Guy, BLD’s main researcher, was at police headquarters Monday to attend the press conference for Toronto Police Service’s (TPS) very first blitz on drivers who act aggressively with cyclists. It was rumoured this blitz was in response to the strong criticism police got over their recent cyclist blitz. Apparently this was a gesture to improve relations with cyclists.

Guy told us that the Q&A period after the announcement was dominated by competing pro-car versus pro-bike media. During this back and forth our intrepid researcher managed to get in a question to TPS spokesperson Sgt. William Parker. He asked, “Why is this campaign being carried out now when the number of cyclists is approaching its seasonal low.” To which Sgt.Parker replied, “This is a time of year that many private citizens like to dress up in costume to celebrate Halloween. We have a responsibility to reduce any chance that our officers on the streets, especially officers on bicycles, are not mistaken for private citizens”.

At this point a barrage of questions were put to Sgt.Parker. Essentially there was general consensus amongst all of the media, they all wanted clarification of the answer and wanted to know what costume was causing the TPS so much grief. At this point the press conference came to an abrupt halt as Sgt.Parker hurriedly left the room.

Later in the day BLD received an email from Inspector James King, Communications Division, TPS. “The campaign against aggressive drivers brought to the media’s attention this morning has been canceled. Toronto’s drivers should rest assured that they will not be inconvenienced by a so-called “blitz”. We sincerely apologize for this poorly communicated and misdirected effort. Our resources will be directed at the main problem, those who impersonate clowns. A criminal offence in Canada.”

A few hours later we received a second email from Inspector King. We were advised that his first email had a typo. The word “clowns” should be replaced with “peace officers” and that he “...sincerely regretted the error”.

Many cycling advocacy groups expressed disappointment with the decision but hoped that next year the cops could try again.

Special thanks to our researcher G. Fawkes for all of his diligent work.
Posted by Darren at 8:17 pm

Clowns are a serious problem, I think this issue should be re-visited. I was myself fooled by a clown impersonator. I was walking on Queen West when a man with a big red nose and funny clothes asked me for a loonie. When I demanded that he first honk his horn or squirt water from a flower he just cursed me and went away.

But what if I had given him that loonie? Then where would I be?

This is a serious matter, TPS has let me down.