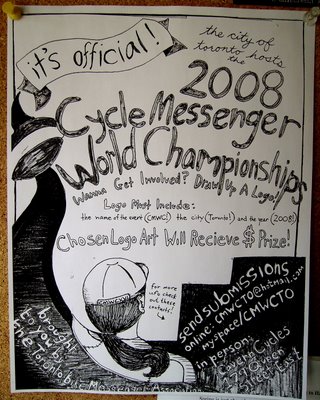 Well if the "City of Toronto" is hosting the event I can guarantee that it is going to be fucked.

Good thing is that city is not hosting the event. The Toronto Messenger Association is, so it will be fantastic and super fun.
;-)

Ya I kinda of figured that the couriers would not allow the city to get its dirty paws on it.

I will be stealing this information

thank
you
very
much

True, the couriers won't release any control of the event, it's theirs & anyone wishing to "cash in" on it whether the city or spnsors has to play by their rules.

I heard the main event is on the Toronto Island....like, a huge chunk of the island! I saw what looked like messengers surveying a large area, they were making notes & measuring....but still in messenger bags and cycling stuff on the wekend...they looked oddly industrious, the opposite of what I think of when I see messengers cruising around