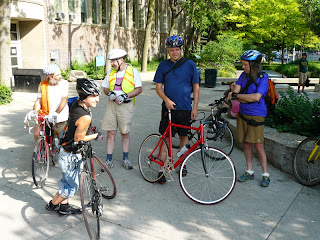 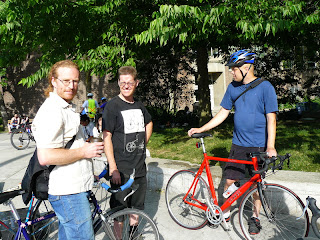 Some of the 22 riders who rode during the memorial for the cyclist killed by a truck on Bayview.

It should be noted that AA Heaps nor any other official from the city attended the memorial despite several invitations from ARC and others. Instead the city chose to hold this event on the same day.

The fallen cyclist was described by a friend as: "... An excellent cyclist who understood the rules of the road and for many years he rode the same route to work every day in all seasons. He rode because he believed that one less car on the road was helping everybody."

More photos by Vic
Posted by Tino at 9:04 am

It's industrial traffic up there with nasty road design, and the message that speed kills has gotta be pumped up again, including tickets.

And I'd like to thank the corpulent rat bag who informed us we were blocking traffic. Hopefully your grand-daughter didn't inherit your intelligence.

http://www.fireflybrigade.org/ check this website guys,hope will give you more encourage to be come bike fanatic...

check this our website in philippines,manila we are the hardcore bike activist in the philippines.(www.fireflybrigade.org)thanks guys! life is to short,bike hard""""""The fireflies have fled the city because they could not stand its dirty air. All of us cyclists, pedestrians, commuters, even those who ride cars who live, work and raise families in the city may suffer the same fate. We continue to dirty our city's air with polluting vehicles and factories. As a result, we also risk disappearing like the fireflies."
"""