Where are they? I ask again 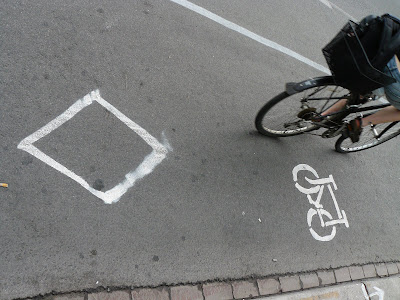 Originally posted June 19th!
Adrian Heaps, the newly appointed chair of Toronto's Cycling Committee, says as a cyclist, he absolutely understands why groups such as the Repair Squad are so frustrated with the delays. But, he adds, the city is going to hit its 30 kilometre target for 2007 or else. (Or else, what?)

Ok, someone help me out here. Has anyone seen actually noticed a NEW Bike Lane installed anywhere in town this year? If so, please let me know, because I am getting out my measuring tape; the little one.
Posted by Tino at 4:45 pm

You can borrow my micrometre.

I bet they're counting Beverly!

Right. We're talking NEW bike lanes here ... Beverly does not count. And believe me I will measure them myself. Even if they are out in the burbs.

Tino you will need glasses. Being so old and all you will not be able to see the fine details. I wonder if it includes the road outside my house, they is supposed to be a bike lane there since last year.

Oh, yeah, and Lappin a street no one can find in my ward is also slated for a bike lane ... if ever, the street south and east Hallam which is super busy with bikes will left withut one, of course.
By the way, the Lansdowne sharrows do not count. I don't care what anyone may say.

I think there was about .3km put in on Strachan Ave. south of King St. and wasn't there a $75,000ish hit to the bike lane budget as the local Councillor Pantalone felt that a right turn lane into Liberty Village was needed as a direct consequence of this new bit of bike lane so let's make sure we use up the funds eh?
Somewhere there was a great quote from him about how everything gets raided for other "causes" - so let's go after the FSE eh?

Nope.
Strachan went in BEFORE the election thus the term 'election stripes' which was coined for them
and the Harbord extension.

The only BIKE LANES (railpath does not count either, sorry.) that I heard about were Yongs south of Front and maybe Eastern ...

If I close my eyes really tight I can see the bike lanes they put in on Pharmacy Ave (Heaps' ward) just last year. Come by and we can christen them with some beer... being cash poor at the moment you will have to close your eyes for that too.

don't throw rotten tomatoes at me, but there's actually been a proper bike lane painted within the last six weeks on Castlefield, between Dufferin and Marlee. Not big, but it's there, and it's definitely brand new. I'm on that road every day. The lane marker was painted a couple weeks ago, and just today they painted the bicycle stencils in.
-Tovi

Oh, no Tovi. That's is good news. I'll be out there soon with the measuring tape.

i noticed this morning the bike lane at dupont and davenport has been removed..

marlee from hopewell to lawrence is a new (non-standard and non-marked) bike lane. it sucks, but better than nothin... there was enough width, i think it was an after thought by moscoe.

Interesting ... I guess we're getting a record set of bike lanes painted in the next two months.

There are many new bike lanes. Painted by the O. Urban Repair Squad. Clearly those count.
However, the city might try to argue that their budget for bike lane creation has been decimated due to the cleanup costs that O.U.R.S bike lanes require...

Right the lanes by O.U.R.S. should count but the city would look ridiculous that the cost of removing them hampered their budget for putting in new ones.
Nice try.

I'm trying to find to find out... under the auspices that we really should be celebrating these lanes a lot more when they go in...AND I'm just the girl to get the party started ;-)

The Railpath doesn't count as a lane OR a bikePATH! anywayz it hasn't been constructed..'next year' (maybe...)

thx to Tovi and Brandon for the new info.

The Marlee "bike lane" was there last year already. And it is not official because it does not conform to the bike lane guidelines for width. That's why it's unmarked.

the one on castlefield isn't on the city list from the consultation and castelfield runs parallel to roselawn..so now i'm confuuused. hmph.

Thanks tt, I think 1km is all they have to show for thus far.

Panic, anyone. I think not. I got a debriefing session with my mole inside the transportation dept. on Friday CM ...