A Fun Way To Get More Space On the Road

Hamish Wilson writes:
"Todd and Sage have a nice way of encouraging motorists to give them space - some colourful whirligigs that extend a bit out from their bikes. They were biking on Bloor, in the part that has long been known to the City as extra-dangerous and needing the bike lanes, and it seems that these extensions do a really fine job of getting motorists to shove over, and almost make a bike lane space for us, without the white lines, etc. This is nowhere near the large constructs to car size that the activists at Le Monde du Bicyclette attached to their bikes in the Montreal activism that helped that City surge forward to a fine bike city, but they look colourful, effective, cheap and fairly easy to attach. Photos by Hamish Wilson 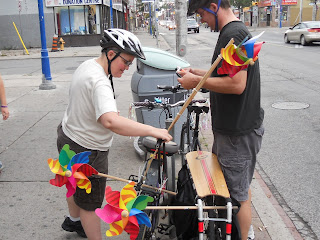 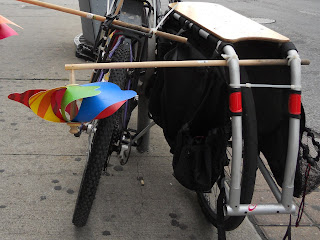 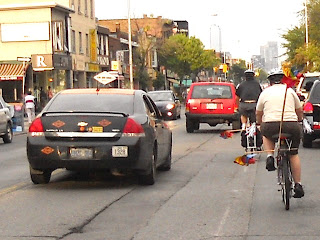 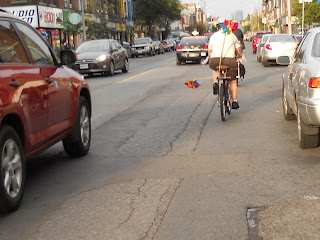 Update: Todd writes about the experience: "We're really liking having the extra space. I really notice it on residential streets where drivers often wait quite some time for a safe opportunity to pass."
Posted by Tino at 10:43 am

I bought a flag on a plastic spring loaded pole its about 17 inches long sticks out from the rear of my bike to stop cars from getting close enough to knock my handlebars with their mirrors; and when I'm towing a trailer. They don't want to get their car scratched so they keep their distance usually. Got it at Urbane on John Street. Folds out of the way when not in use.

Well, nice idea that unfortunately may backfire. In many parts of Europe in the late 80ies authorities distributed plastic flags with red cat's eyes that functioned pretty much in the same way to school children. After some time they figured out that for some car drivers it became a "sport" trying to clip these flags. There are no statistics but it is believed that this led to several fatal accidents.