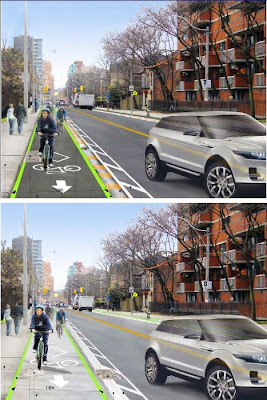 Come and get your Red Herring ... http://www.toronto.ca/cycling/network/pdf/2012-01-26_sherbourne_street_panel_boards.pdf
Posted by Tino at 2:46 pm

It looks good overall but I have a few criticisms of a few aspects.
It's good that car parking will no longer be allowed. It will be a tough fight but there are so many other places to park on the side streets they will adjust. Listen to them when they complain then nicely show them other places to park. Many of them who currently park there are likely going to be future users of these bike lanes. Don't alienate them or they'll dig in their heels.
In fact, all the opposition is predictable and can be prepared for. It tends to be the same things in every city.
Here are my comments:
The edges with their slopes are similar to Number 3 Road in Richmond, BC. I suspect the speeds on Sherbourne aren't so fast so it'll be fine. If it was a faster street there would need to be a better barrier.
It's not even necessary for the bike lanes to be raised. The barrier should be. It's cheaper to just put in a barrier and keep the present street there. Only raise it where there are pedestrian crossings, bus stops and delivery zones.
If the bike lanes are raised throughout to the same level as the sidewalk, it will cause people to walk on them. I see it all the time on the Vancouver Seawall and it's inconvenient.
The intersections are similar to Vancouver but there are better designs in Europe. I find it unclear how to make a turn with the bike boxes in Van. In the Sherbourne design the turning bike boxes are on the side of the pedestrian crossing closer to the intersection which is better than Vancouver's approach.
The report states that it isn't wide enough to allow car turning. This isn't true but the design needs to be different. The pedestrian crossing and bike crossing should be inset so that they're in the line of sight of a motorist. Also a different light timing so that cars turning aren't doing it at the same time as pedestrians and bikes crossing.
http://wiki.coe.neu.edu/groups/advtraffic2011/wiki/5a6d5/images/b0233.png
It'll take some education for all to get used to an advance right turn but they'll learn it.

The bus stops are badly designed in this. The bike lane should go around the place where the people are waiting to get on the bus. The track should rise up as an indicator to someone cycling that they're entering a shared zone. Some colour other than green should be used there too indicating to all that it's an area where you need to pay attention.
Here's a bus stop on Dunsmuir in Vancouver.
http://flic.kr/p/8PE7rP
It goes straight but could go around.

The chart showing that there are problems with bi-directional tracks is false. I think that two uni-directional tracks are good on this street but this chart seems to be showing that bi-directional tracks have problems with conflict and delays. What a bunch of BS. Here in Vancouver we haven't experienced any of the things this chart says. It doesn't matter for this project but you really have to question them where they get these ideas from as there is no basis in fact.
A bidirectional path may be the perfect thing for somewhere else in Toronto in the future and you don't need people thinking false things based on this bogus chart.
I know that Ford has disbanded the Cycling Advisory Committee but people should still contact the engineering department and give them feedback and show them better designs.