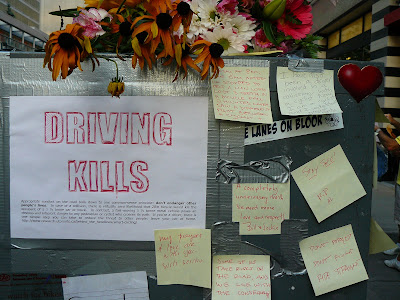 Description by a friend of mine who was there before me.
"Lots of media were already set up - CBC, City, Global and a whack of photographers. I hung around waiting, starting to suspect that I had mixed things up.

At about 5:30 PM some couriers started turning up and took over the street. I debated joining them, but decided against it since I recognized nobody, and also because I didn't want my boss to see my face on TV.

More couriers soon showed up; there must have been about 30 to 40 at the peak of the protest. Bikes were laid in the street. People sat or lay down. Several people spoke, and there were a few overlapping messages, mainly:
- grief and outrage at the death
- anger that couriers are given no respect
- demands for justice
- a lot of anger directed at office types, especially lawyers

Someone vowed that: "We will be heard. We'll come back every day if we have to" - people were really PO-ed and angry. A courier then came with sunflowers. Sheppard's girlfriend brought a potted plant. She was crying. There were hugs and tears all round. Things were very emotional.

Most of the motorists were pretty good about waiting although I did see quite a few one finger salutes flying in both directions amid honking, jeers and the blasts of a whistle. Towards the end, the couriers started chanting "murderer".

Bike cops showed up, followed by a cruiser shortly after, and the cops were pretty good about things. I don't know what was said, but suddenly there were cheers from the couriers. And they picked up their bikes and rode East.

I spoke to some people in the small sidewalk crowd and most people were sympathetic and shocked that a former AG could have acted so violently. Some people felt that this was a good way of keeping the pressure on the case. Only one young man poo-poohed the protest as being ineffectual."
Posted by Tino at 6:26 pm

I understand being upset if your friend is killed in this way but what is the point of this type of protest? What do you hope to accomplish?