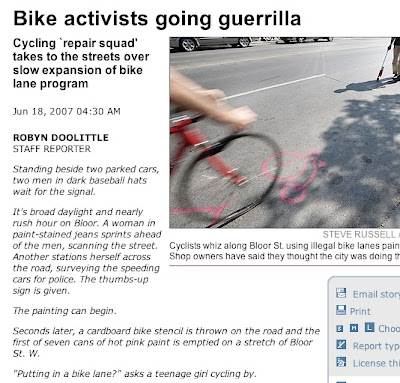 A group of vigilante cyclists named the Other Urban Repair Squad (OURS – get it?) has created its own illegal bike lanes by spray-painting bike-lane logos on Toronto roadways. This defacement of public property is, in its eyes, justified because the city isn't moving fast enough on demands for more bike lanes. Taxpayers will have to pick up the tab for cleanup.

I find it amusing that a group that isn't required to undergo driver testing or pay annual insurance premiums or driver or vehicle licensing fees objects to having to share the road with motorists.

The frustration that most cyclists in Toronto tolerate daily is not to be understated. We thought a "green" pro-cycling mayor and city council would expand the bike infrastructure in Toronto, but all we got was a number of well-intentioned politicians who say the right things but can't do any of the right things.

While some may argue that the answer to the cycling challenges in Toronto is not installing more bike lanes – as they segregate legal users of the road to a small strip that is often made hazardous with debris – many potential cyclists cite that a bike lane along Bloor St. is vital.

What the city really needs, in addition to even moderate activity on bike-lane installation, is a comprehensive education program for both cyclists and motorists, reminding both of their legal responsibilities and expectations. And we need the police to enforce the rules.
Joe LaFortune, Toronto

I applaud the activists who are stencilling their own bike lanes on Toronto streets. The city, with an ample budget for bike paths but without the leadership to implement a plan, needs a good kick in the pants for its abject inaction.

Bikes are great for the environment and for our health, so what's not to like? It's time to protect bicyclists with bike lanes.
Don Tai, Toronto

After 10 years of fighting off aggressive and inattentive car and SUV drivers and risking my neck for a couple of feet of pavement, I have become almost ready to give up my daily bicycle commute to work. So I welcome actions, like lane painting by the Other Urban Repair Squad, that highlight the outrageous fact that drivers continue to be given priority over cyclists, even as we face a smog and climate crisis.
Michael Polanyi, Toronto

While I don't condone vandalism, I must applaud the creativity of the Other Urban Repair Squad. Toronto is years behind other cities in becoming cycling friendly. For a city with a poor environmental report card, this is an area where it could improve upon.

Now, if only the activists had painted a bike lane on Yonge St., I would be ditching my Metropass in favour of my bike this summer. Until that happens, I fear for my life any time I try to bike to work.
Colin Haubrich, Toronto

Does the Other Urban Repair Squad take requests? We sure could use a bike lane on Bayview Ave. No rush – any time this summer would be good. Many thanks.
Marjorie Nichol, Toronto