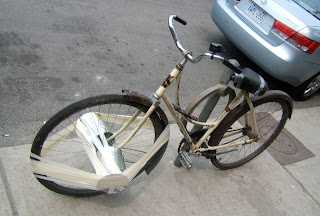 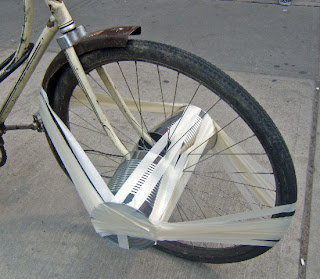 Photos by John Copping
Posted by Tino at 6:12 am

Theory 1: Person must've heard about the unsafe ringpost locking here in Toronto. After all, most bike thieves are not likely to carry a pair of scissors, so would be stymied by the ribbon wrapped around the front wheel and be unable to ride off with the steed.

Home made pegs, put on by an aspiring bmx'er.

Hiding hub-mounted razor blades, like the chariots in that cool scene in Gladiator!

Bike is taking a deserved nap. Tired of all the hubbub, it has put on muffs to cut the din of surrounding street noise.

I agree with Jamie, the dude is testing out cans before putting wicked nasty gladiator blades on his front wheel.

I think Jamie is on to something here...

Back in the late eighties and early nineties, the mountain bike parts manufacturers would let the racers get access to early prototype parts. They would disguise the parts with stickers, pieces of carbon fiber, plastic, and cardboard, to throw off competitor company spies.

Perhaps the coffee cans are hiding some new, unobtainium, proprietary wheel hub design? Something involving nanotubes or a matrix of Elmers Glue and fusilli pasta?