Many were left in yards, on porches, automobile racks, or in unlocked bike racks.

Police are urging people to ensure their bicycles are properly locked. Ocean City residents can also register their bikes at no cost with the police department and details about this program are available online at www.ocpdmd.com

Police said their investigations are hampered by owners who do not know the serial numbers of their bikes making it difficult for officers to try and trace the bikes through the National Crime Information Center database.

Anyone with information on the bicycle thefts is asked to contact the OCPD Criminal Investigation Division at 410-723-6604, or Police at 14 Division in Toronto, Canada
Posted by Guido Bruidoclarke at 5:29 pm 2 comments:

Whether people are turning bicycles into fashion statements to stand out from the pedaling crowd, or whether more people are taking to two wheels because bicycles were fashionable in the first place is a chicken-and-egg conundrum for many young people in Osaka.

With 83 percent of Osakans owning bicycles--the highest ratio in any of the nation's prefectures, including Tokyo--bicycles have clearly become indispensible part of or modes of transport in the daily lives of the city's residents.

Against such a background, I've noticed many young people in the city riding bicycles, not only as a mode of transport, but also as fashion accessaries--just like the designer bags they carry.

A 22-year-old man in the Horie fashion district of the city wears a blue T-shirt that matches the color of the tires on his mountain bike.

The man, who says he likes wild fashion styles, also coordinates his cap and chain-style lock with an animal print design.

A 24-year-old woman modified her fixed-gear bicycle with parts in vivid pink and green.

"I can fit colorful parts onto my bicycle although it's difficult to use these colors for my clothes," she said.

A 31-year-old man's remodeled chopper bicycle is difficult to ride as it has problems with steep hills, and U-turns are hard to execute.

"I fell in love with this muscular design," he says. "I don't mind the inconvenience. It's not for convenience but fashion, really."

Cycle Shop 203 in Osaka deals with bicycles with neat designs and attracts fashion-conscious customers. The shop is painted with the French tricolor flag--in recognition of the world-famous Tour de France bicycle race--and looks just like a boutique.

The owner of the shop says his customers include women with an interest in fashion magazines.

Bicycles are enjoying a resurgence in popularity as the price of gasoline gets higher and higher and the values of a so-called low-carbon society continue to be promoted--not to mention the health benefits that go with regular exercise.

With even luxury goods companies such as Chanel selling bicycles, it seems that riding a bicycle as a fashion statement is steadily on the increase in Osaka.

Hug a hoodie? Or kill a bike thief??

Some of our motoring section's more flinty-hearted readers may have felt differently. But me, I felt sorry for him. Standing there in his ridiculous little shorts, with his socks pulled up, his rucksack heaped sadly at his feet and his mobile phone clamped despondently to his ear. He looked stranded, wrecked, lost, at sea.

Lordy, I thought, as I contemplated yesterday's grainy shot of David Cameron on Portobello Road after having his bike stolen. Forget the Glasgow East by-election.

This is the real political pivot. I looked at him and I knew exactly how he felt. Twenty-thousand Londoners a year know exactly how he felt.
Having your bike nicked is no small thing. You are immobile. You are astonished. Embarrassment and shame surges to your face - and continues to surge as, flustered, you make an idiotic spectacle of yourself flagging down passers-by asking if they saw anything.

Your bicycle is among the possessions with which you form the most intimate relationship. You feel sick at heart.

And, if you have lost your bicycle in a particularly stupid way, you feel humiliated. Like the old friend of mine who - idiot! - locked her bike to a railing by its quick-release front wheel.

Like Mr Cameron, reported to have chained his bicycle to a two-foot bollard - a schoolboy error, as any cyclist knows: the hateful Portobello Road toe-rags who helped themselves to it needed only lift bike - lock and all - up and over and off.

The man or woman whose bicycle is stolen is afflicted, in my experience, by a unique anger. Bicycle theft feels not just like an offence against property, but an offence in the first place against the person, and in the second against civilisation itself. Empty my pocket, and earn my anger. Steal my bicycle, and earn my hate.

The view attributed to H G Wells - "Every time I see an adult on a bicycle, I no longer despair for the future of the human race" - seems to me to go to the heart of it. A cyclist is an object instance of the human being at his noblest: vulnerable; somewhat absurd to look upon; modest in his consumption of energy and space and his output of noise; self-powered; independent.

This is, perversely, why so many cyclists act so obnoxiously. The feeling of righteousness, once established, is too little policed by the unruly ego and causes the prideful cyclist to fall into error - running red lights, terrorising pedestrians, or lecturing fellow citizens on the need to be green while all the while having your briefcase ferried behind you in a chauffeur-driven limo.

Every one of the 20,000 cycles stolen annually in London - as anyone who has lost a bicycle themselves knows - was stolen by someone for whom Orwell's "boot stamping on a human face forever" would be insufficient requital.

We cyclists fantasise about anti-theft devices that will impale them, maim them, blow them up, afflict them with galloping impetigo and wobbly teeth, with impotence and halitosis, with decapitation and athlete's foot. We want them extirpated, hung from cranes.

Those who steal bicycles, you see, do not steal them out of economic need, or social deprivation, or any of that old cobblers. They steal them out of sheer malice. They are the brick through the window, the coin down the bodywork, the car aerial unthinkingly bent off for no better reason than it protrudes.

Bicycle thieves are not hard-up. They are evil. They steal our bicycles - be they rattling antiques carbuncled with home-applied gloss paint or carbon-fibre, Shimano-geared rockets - for the simple pleasure of imagining our impotent rage at their loss. They resell them only so they can have the fun of stealing them again, like a trout fisherman keeping his lake well stocked.

I once had the saddle stolen from a locked bike. What larks! On another occasion, someone took the trouble to remove and throw away the single nut that holds the front wheel on.

Worthless. But how they must have laughed as they imagined me climb aboard and push off confidently, only to fall flat on my face as my front wheel sailed off into the traffic by itself. Like Zippo's Circus, see?

And that is why those of this paper's readers who think the Conservative leader is still too liberal - some of whom may have been less than sympathetic to his plight - will come to look back on this, with gratitude, as a real turning point.

Unless I miss my mark, the sniggering booby of a passer-by who sneaked that mobile phone shot of Mr Cameron in his distress has captured something historic. That was the moment hug-a-hoodie became kill-a-bike-thief. The moment the liberal was mugged.

The moment at which, whether he knows it yet or not, the iron entered Mr Cameron's soul.
Posted by Guido Bruidoclarke at 11:47 am 1 comment: 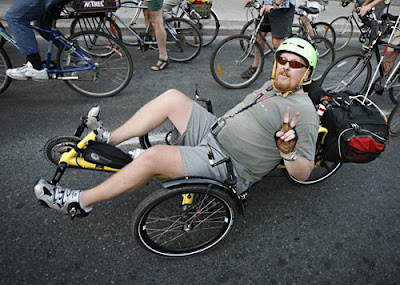 (TORONTO) A coalition of cycling groups today filed a formal demand with Ontario’s Environment Commissioner for an investigation of the City of Toronto for violating the province’s Environmental Assessment Act. The groups allege that in approving a major road reconstruction project along the so-called Mink Mile on Bloor St. (between Avenue Rd. and Church St.) the City failed to comply with its legal obligations, including public consultation.

Construction on the project --- a partnership between the City and the Bloor-Yorkville Business Improvement Area --- began on July 14, 2008 in an area considered to be Canada’s premier shopping district. Bloor Street is also the city’s premier cycling route (in numbers) but has one of the highest cycling injury rates. The groups say that proper public consultation would have highlighted Ontario’s planning regime, put in place three years ago, which directs cities to ensure cyclists’ safety to reduce traffic pollution.

“In a time of high gas prices and increasing vehicle emissions we believe Torontonians should have the option not only to ride their bikes, but to do so safely,” said Kristen Courtney, a founding member of Bells on Bloor and a recent University of Toronto law graduate who has been hit by cars several times on Bloor St.

In road projects, the city is obliged to comply with the Municipal Class Environmental Assessment, which provides a streamlined process for city road and other projects. If the city does not comply with this process, including mandatory public consultation in certain cases, it can be charged under the province’s EA Act. The requirements apply even if one of the parties involved is private. A conviction under the Act carries a fine up to $10,000 for a first offence.

“We support the pedestrian improvements in this project,“ said Angela Bischoff of Take The Tooker, a cycling group that has been advocating for a Bloor St. bike lane since 2005. “Unfortunately, the city has again forgotten cyclists. Getting used to a bike lane might be tough for some people, but if you are a child with asthma, so is smog.”

According to City documents traffic flow may actually increase on the Mink Mile after construction is complete. A 2007 report by Toronto Public Health (TPH) concluded that each year in Toronto 440 premature deaths and 1,200 acute bronchitis episodes are caused by traffic pollution. TPH made various recommendations to the City including a call for better cycling conditions. Where bike lanes have been added in Toronto, cycling traffic has increased by up to 42%.

“City politicians are showing a rather cavalier attitude towards provincial laws that direct them to provide for cyclists’ safety,” said Albert Koehl, an environmental lawyer who filed the petition for the groups. “Unfortunately, this is not an isolated incident – that’s why we are taking a stand. The city rightly expects cyclists to obey the law; cyclists expect no less from the city.”

I have news for the cycling community of Toronto. Bike Pirates will be closing its doors in four weeks time.

The land lord has decided to sell the building. Please be advised that the Bike Pirate collective is actively looking for space, if a kind soul out there wishes to help us in our pursuit for a new space please contact info@bikepirates.com