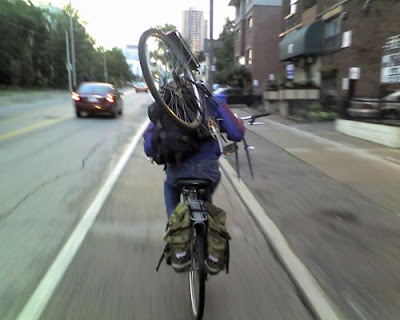 Mayor has tantrum on reporter.

Toronto- Today at a news conference on the state of the City the Mayor commented on a recent finding by students at the University of Guelph. They found that if the paper used in studies, commissioned by the City, of cycling issues were laid out to make a bike lane it would be some 145 034 kms long at 2 metres wide. Their study looked at studies from years 2000 through to 2007.

While defending the studies and explaining their importance in job creation a reporter in the scrum quipped, "...and enough hot air to fill 27 Zeppelins." Overhearing this quip the Mayor demanded an apology for the inaccurate figure. The reporter replied that he was only expressing an opinion he has often heard from cyclists. This quickly degenerated with the Mayor repeatedly shouting at the reporter, "IT WOULD ONLY BE 23!!!" Eventually the reporter was handcuffed and led out of the room.
Posted by Darren at 6:41 pm 2 comments: