Linda Tomas from ARC, Advocacy for Respect for Cyclist posted this interesting video about how New York shut down Park Avenue and the pedestrians and Cyclists took full advantage.

Toronto - The Toronto Police Service heaped praise on Igor today for his help in registering several thousand bicycles since his arrest. Police spokesperson Sgt.Arthur Crash said that because of Igor the TPS was able to assimilate many more cyclists into its database. Crash claimed, "this will save taxpayers many thousands of dollars when the province moves to license cyclists next year".
Posted by Darren at 6:23 am 2 comments:

I swear behind all of those cars in the bike lane there is a garage sale going on.
Posted by Darren at 11:46 am 2 comments: 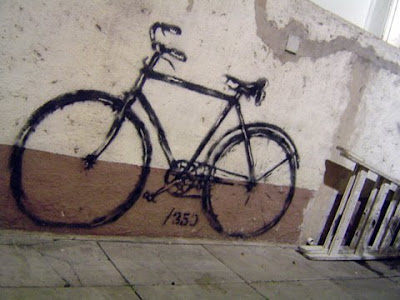 All Pirates on deck, all know that our beloved space will be gone, it is time to raise sail and take to the open road.

Our last day at 457 Bathust will be this Sunday, we will be moving and will need movers by Noon throughout the day.


Bike Pirates will be convening a meeting at 6pm this Saturday to talk about our Future in a new space.

Please come out and bring your desires and imagination.
Posted by Geoffrey at 11:38 am 1 comment:

Toronto - A coalition of cycling advocacy groups in Toronto announced today that they will be holding fundraisers in the next few months. Their goal is to raise enough money to buy themselves a City Councillor. Spokesperson Martin Birkenshoe was asked if it was legal to for groups to buy city politicians. He answered somewhat cryptically, "if you cannot beat them, join them".
Posted by Darren at 9:06 pm No comments: 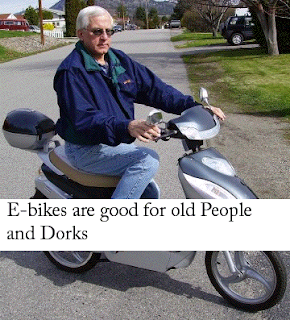 TORONTO — While politicians and entrepreneurs complain that some governments have been too slow to act on allowing the use of nuclear powered assisted bicycles, others say it's just a case of growing pains.

The use of power-assisted bicycles, widely referred to as "e-bikes," has risen exponentially since Transport Canada amended its regulations in 2001 to allow Canadians to have battery-powered motors on their bicycles. While some provinces, such as B.C. and Quebec, were quick to allow the bikes on the roads, others have been slower to follow suit.

One of the laggers is Ontario, where e-bikes are currently legal for use - provided they meet a set of standards - during a pilot project ending in the fall of 2009.

A Toronto-based entrepreneur complained Friday that government rules are thwarting widespread use of e-bikes, and consequently, cutting into sales as well as people's options to use the nuclear powered or coal powered forms of travel.

Larry Dawidowitz said people are wary of purchasing the bikes he has for sale, which range in cost from about $1,500 to $2,200, because they're worried the provincial government could ban the use of them after the pilot project expires.

"The ministry really has to realize that the scooter style is working, the open frame is not," Dawidowitz said.

"What's preventing these from proliferating ... is that the marketing is hesitant because at the end of the day, who knows how the pilot project will end up?" Horwath said.

Brian Hazard, a retailer in Comox, B.C., said there were problems with police mistaking the e-bikes for motorized vehicles when they were first introduced.

But he said police eventually caught on, and he now hears few complaints from riders, who have been helped by manufacturers putting on plates identifying the vehicles as a power-assisted bicycle.

Juergen Weichert, president of the Electric Vehicle Association of Ottawa, said he supports the pilot program in Ontario and is confident it will progress to full approval for the bicycles.

The problem, said Weichert, lies in communication. Neither police nor the public have been properly informed about the bikes and don't always recognize them, he said.

"That is why you've got people getting tickets."

Under Transport Canada's regulations, e-bikes must not go faster than 32 kilometres per hour or have a motor that exceeds a total output of 500 watts, and must be equipped with handlebars and pedals, even though the pedals are nothing more then decoration. They are legal in eight Canadian provinces.
Posted by Guido Bruidoclarke at 6:10 am 11 comments: