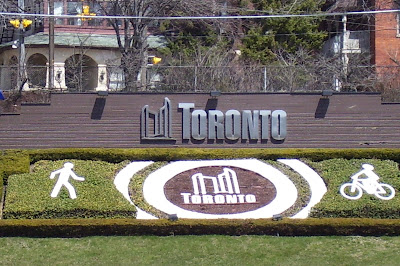 
By Daniel Egan, Barb Wentworth and Sue Zielinski
Wow! Bicycling Magazine chose our city as the best cycling city in North America. In their November-December issue, Scott Martin writes, ‘The blend of programs, ridership and natural amenities sets Toronto apart from the other surveyed cities.’ He also attributes our success to the city’s vibrant mix of business and neighbourhoods, a progressive local government, the 20-year-old City Cycling Committee and a dynamic, diverse cycling community.

We’d like to emphasize this last point - Toronto’s dynamic, diverse cycling community. Toronto cyclists can take credit for winning this award. In the words of Andy Clarke of the Bicycle Federation of America who visited in April this year, ‘there are a hell of a lot of people riding bikes.’ And a hell of a lot of you have worked hard to make this a cycling city. Thanks to all of you who have organized in your communities and workplaces; who have encouraged your City Councillors to support cycling programs; and who lead by example by transporting yourselves (and lots of other things) by bike.
Ironically, Bicycling touts Toronto’s BUG network as an example of our non-hierarchical approach to getting things done, yet in the same breath suggest that our submission to them was prepared by Daniel Egan and his staff. In fact, we too work in a non-hierarchical fashion, as a team of equals, each with our own areas of responsibility. That’s always been one of our strengths. We work together, and we work for you, the cyclists of Toronto.

We have come a long way in the past decade and we are proud of Bicycling Magazine’s recognition. But we’re still a long way from our destination. There is so much more to do. We look forward to working with all of you to get there - to a truly bike friendly city.

Toronto is number one? Is it THAT bad in N. America?

Ahem. That was in 1995. Toronto no longer makes the list.