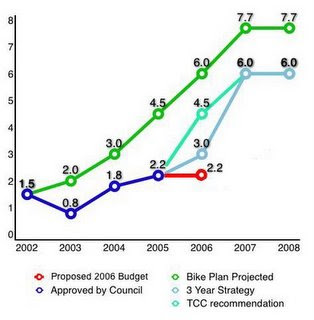 In 2001, there were roughly 40km of bike lanes in Toronto. The 2001 plan called for adding over 450km more in order to create a city-wide network which would ensure that everyone in Toronto is within a five minute ride of the network.

In 2011, less than 3km to are be added this year we are getting close to 120km. About 27km already approved by council are in limbo as in deferred.

Why? Lack of political will certainly but another reason is simply that the plan was seriously underfunded from the beginning
as the graphic by Martin Koob shows. No funding, no staff, no plan. In fact, the 800,000 in 2003 came from the road budget from just one City Councillor or there would have no funding at all.
Posted by Tino at 12:07 pm