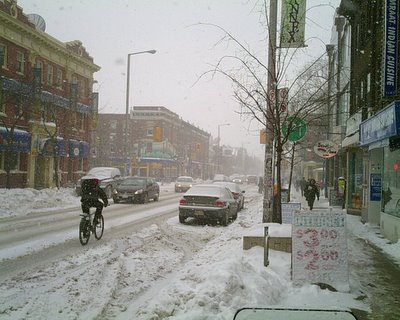 as he is canadian...
it is your jurisdiction

what is the punishment for such a hate crime?
snowball to the face?

In Canada, the minimum punishment would be a courier sleeping on his
couch for a month, drinking beer, smoking BC hydro and eating Nacho chips with his buddies until four in the morning EVERY NIGHT!
And yeah, the Mofo can do his laundry, too!

That could have been me. I was riding in that storm not too far from where that picture was taken, I shook my head at a car that cut me off (he turned right in front of me). A guy drove up beside me, rolled down his window and said: "you're shaking your head and you're riding in this weather?" I just ignored him. The fact is that cycling was faster than driving that day, and I left him in the dust, I mean snow.