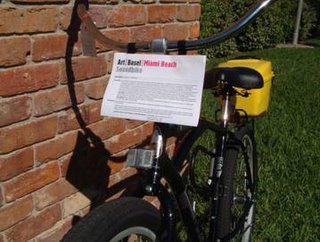 SOUNDBIKE by Jessica Thompson was showcased at Art Basel Miami Beach Art Projects, curated by Natalie Kovacs. SOUNDBIKE garnered a lot of buzz in Miami from the international art world.

SOUNDBIKE is a portable sound piece that uses motion-based mini-generators mounted to an ordinary bicycle to broadcast the sound of laughter as the bike is pedaled through the urban environment. The laughter is generated by playing sequences of short source clips that start when the bike reaches a cruising speed, and then respond to the bike's velocity. The piece is exhibited by loaning the bike on an honour system. By broadcasting sound directly as a result of his or her motion and gesture, the rider simultaneously occupies the role of controller, performer and audience, becoming part of the acoustic ecology of the city through technological intervention.

Thanks for posting this. Jen and I went to check it out last night and we (literally) had a good laugh. :-)