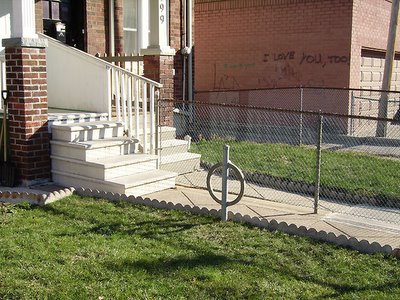 that is soooooo awesome, is it for real and it is yours cause I want one :D

that is soooooo awesome, is it for real and it is yours cause I want one :D

It's real. Taken on Borden street.

that's awesome. markham (where im from) needs bike racks. or at least better ones like the ones found in downtown. usually i'm left with wrapping my lock again a giant light pole. usually end up scratching my bike or locking it up inefficiently.

That's so excellent! I've been saying for a while that when I get a house I would want to get post-and-ring visitor parking racks.

If there's a driveway, I would also stripe it and add bike lane symbols. :)

Oh...speaking of bike racks... I was on the subway with my bike a few weeks ago and this guy started talking to me about bikes. Apparently he was working on a project with some mentally challenged (I think??) people to design artistic bike racks. They should be appearing around the city soon, starting with some on Queen St. West.

Neat. Yeah, I think all cyclist should get their own
bike ring. It's the least the city can do.

that's both a great picture and a great idea. hmmm. i know what the next installation in my driveway is going to be.

all the better with the "i love you, too" on the wall.

I was just thinking the other day. The city is so proud that it has installed 15 000 posts. Yet going by their own numbers, that 2% of Torontonians commute by bicycle, we are short a minimum of 35 000 posts. There are no more parking meters to lock to and telephone poles are too fat for Ulocks and some cables.
Each 1% increase in the number of commuters requires another 25 000 posts. This does not even account for casual riders.

"Actually, quite a few posts get knocked over or pulled out by construction workers. If they're left lying around and someone picks it up to use, I'm not going to go after them... It would be nice to know where it came from, though, so we can install a
replacement."

I wonder if it's possible to order them directly from the city? I'd love to have them all over my front lawn, if I ever own a lawn. Well, it really wouldn't be a lawn... maybe a Bike Garden. :)

Depends where you live. They will not give you one for a street in Regent Park, even on the two streets that have bike lanes. Shuter and River. Iasked many times but I do not think the city likes the area either for the colour or cause everyone is poor.

Your requests for River and Shuter must not have reached the right person. Call 416-392-9253. The only reason they won't install is if the sidewalk is too narrow, or if it's private property.

you want to leave your bike out side in the River and Shuter area?

Ah but anonymous private businesses often provide bike parking for their employees which would reduce the need for post and rings. (more suited to casual use, like shopping) Places I've worked at: 1.bike rack in underground parking garage, 2.bike rack by front door of building, 3.(best) acceptance of bringing bikes inside the building (park in kitchen or hallway)