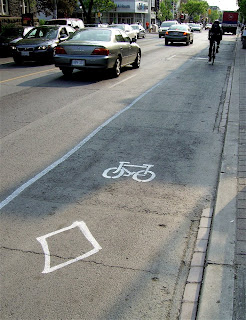 Well it seems that cyclists will be added to the list of people seeking help in our story below. We have fielded many questions from the media about who painted bike lanes on Bloor and who would have the audacity to do something like that. Apparently some cyclists are upset that the new bike lanes will confuse drivers/cyclists and that cars are parking in the lanes willy nilly. Well the latter just means they are like any other bike lane in Toronto. We at BLD believe that cyclists have a little more sense than to be confused by a few squiggly lines. There are reports though that more than a few drivers have claimed that the lines contain subliminal messages that encourage them to do violent acts to fire hydrants while dressed as a clown.

Maybe it is time that we all take a moment and have a beer while we down our meds.
Posted by Darren at 11:57 pm

Walking around in that area yesterday I bumped into three local people who were all quite keen on it. I urged them to tell Councillor Vaughan.
But 10 years after the idea of bike lanes was first suggested in a planning study, and 40 years after the subway opened beside Bloor, it's quite understandable that some citizens are most frustrated that the City can't even get it together to do a study of it despite maybe 2 years.
Ex-Councillor Watson, when I lobbied her about the TTTooker, said "just do it yourself", but I'm not that aggressive eh? Thankfully others are.

hamish, if you want change..it is your turn to do something about it..

“Never doubt that a small group of thoughtful, committed citizens can change the world; indeed, it’s the only thing that ever has.”
cheers Gisela

Everyone. My Mom has discovered my Bike Blog. She's is wonderful and an activist herself.
Forgive her.

Damn. I had to go and pick on the boss' mom. I will have to go share a space with the Tony Soprano hiding out in his mom's house.