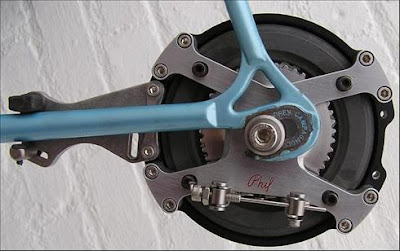 Sad news about an industry icon via BRIN:

BAXTER, IA (BRAIN)—Phil Wood, the man responsible for sealed hubs and bottom brackets, died on March 14 at his daughter's home in Roseville, California. He was 83.

He started the Phil Wood Company in 1971 as primarily a hub maker, though he offered other components. He sold the business to Peter Enright and a group of investors in 1991.

“I feel so lucky to have talked with him about a week before he passed away, and he mentioned again that he was so lucky to sell the business when he did,” said Enright, Phil Wood Company’s president.

“We talked off and on over the years, usually to catch up on news about his friends in the bike business. But he was quite happy to return to the farm after selling the business to help raise his granddaughter,” Enright added.

Wood was a problem-solver working at Food Machinery Corporation. Had he not been bothered chasing bearings for a hub he was rebuilding for his daughter, sealed-bearing hubs might have taken years to hit the bike market, Enright noted.

“He was complaining to Spence Wolf about why no one offered a sealed bearing hub and Wolf told him to make his own hub. A little while later he asked Spence how many he should make. It took Spence a bit to remember what he was talking about. He said make 50 hubs and the business was launched,” Enright said.

Wood’s family is deciding on funeral arrangements at this time.

“I’m glad he and I were able to have that last chat. He was a little bothered he wasn’t as ambulatory as he once was but he was content to move on,” Enright said.

A memorial service for Phil and his wife, Vada, who passed away December 18, 2009, will be held on April 17, at the Calgary Baptist Church in Los Gatos, California, at 11:00 a.m. Phil is survived by his six children. - Matt Wiebe
Posted by Tino at 6:17 pm