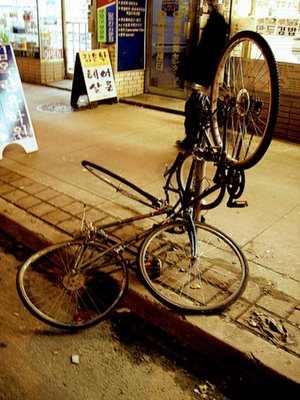 It is a shame the would be thief's warped up the back wheel :| all bike thief's should be smacked in the mouth with a U lock...

Things like this make me wonder if I should even bother commuting on my bike to downtown this summer. if theives cant steal, they can always vandalize

Ah but the question is did the thief warp the back wheel, or did the back wheel get nudged by a car after it was pushed onto the road? I had both rims of my bike warped once while it was parked against a tree in someone's driveway at a country bbq. (the culprit did not own up)

Anonymous, YES definitely still commute on your bike! (don't ride anything fancy/flashy though) I've never (knock on wood) had my current bike (that I've had for 7+ years) stolen or any part of it stolen or vandalized in downtown TO. Previous bike had a stolen wheel and a dented frame from an attempted theft. Don't leave it locked up overnight outside though (when the wheel vanished), I hear about lots of thefts that occur during this time, and its probably when a lot of the vandalism occurs as well.

My friend Mark had a bike stolen from his porch. It was his "cow bike" that was painted black and white, complete with bar-end "horns". He used to just put a lock through the milk crate and to a post on the porch. Well, someone *burned* the damn milk crate to get the bike out!! All that was left was melted/charred bits of plastic. Crazy thieves....

I had a bike stolen outside of work in downtown Ottawa. Less than a month after I bought it too. I was a student at the time, so it took a while for me to save up for another one. grrr.

I'm more careful about locking my bikes now though. When I get my folder in a few months, I might use that for some of my commutes and just bring it inside.

Oh, it looked to me last night that the thief either gave up or that someone had some fun with a couple abandoned bikes ...
The bikes were uite opld and damaged anyway

Yeah I agree, I think it was a car that probably warped up that back wheel. It would take too much effort to do that by hand.

The thing is I love the idea of commuting to downtown. But the bike I will be commuting with isn't exactly cheap. I do have a $10 beater bike, but I live further north of the city and my beater bike wouldn't be able to take me far enough.

The bike I want to commute with is not overly expensive. I'd say slightly better than you're entry-level MTB, which I converted to a road hybrid.

I am thinking of getting 2 really strong locks (chain/U-lock). Of course I'll be locking my 2 wheels and the seat. My worry is if they can't steal the bike, would theives actually go for the components? I've seen pictures of stripped bikes in NYC. Bikes with the fork/deuraillers/bars/stem all taken off.

Anyone with an allen key and some bike knowledge could rip those off in minutes. or am I just being too paranoid ;)

Maybe I should tape up my bike to make it ugly. The cow idea is great vic. sorry to hear about your stolen bike though.

Anonymous, don't leave the bike out overnight. Then the components have a higher likelihood of being stripped. If you have unusually nice components they may be stolen during daytime but if they are average I would find it quite unlikely. There seem to be two classes of thieves - those that target the nice bikes and know the components and what to look for, and those that just target something that looks shiny and pretty but may really be cheap.