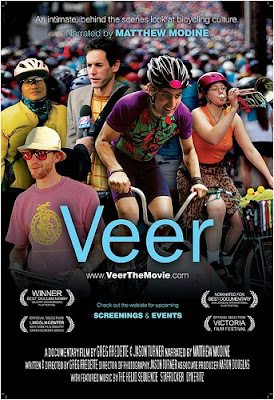 Want to learn more about the Zoobombers? Sprockettes? Cycling activism in the States? Come have a beer and watch a movie with fellow cyclists, friends, TCAT and it's member groups.

The Toronto Coalition for Active Transportation is proud to present Veer, a full-length documentary on community based cycling activism through five main protagonists. There will be drinks and expresso available at the bar.

The film has received numerous awards, including Best Documentary at CUFF and a nomination for Best Documentary at the San Joaquin International Film Festival. Cinematographer Jason Turner recalls, “in Feb the film played the Victoria Film Festival where it sold out its first screening, and was the only film to have a second screening added which also sold out with as many people waiting outside as got in to see it”. So, if you want a chance to see Veer in Toronto, line up early for our August 27th screening at CineCycle, at 8 PM.