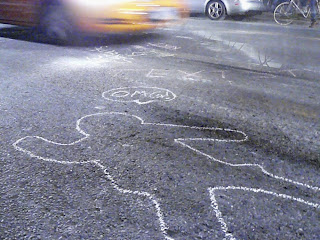 According to MRC des Collines de l'Outaouais police, two Gatineau males, aged 19 and 21, were struck by a red vehicle, possibly a Hyundai Accent, at the intersection of Highways 366 and 307 at 1:20 a.m. Sunday.

The 21-year-old suffered two broken ribs and the 19-year-old is being treated for a broken leg and finger. Neither cyclist’s injuries are life-threatening, said police.
The two cyclists had been on their way to visit a friend, said police.

Ah, Ottawa. You got a real problem, don't you? Better hand out some more tickets to cyclists, eh?
Five cyclists injured in hit & run

I got an idea. How about a zero tolerance policy?
You hit a cyclist or pedestrian you lose your license.
Forever. Period.
Posted by Tino at 7:27 pm

I wouldn't go so far as to yank someone's license for one accident - humans are fallible creatures and error is inevitable - but hit and run? That's different. There should be a zero tolerance on that!