So Stupid It Hurts 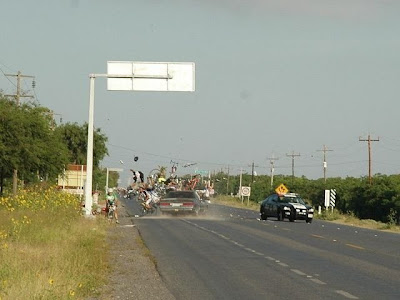 (Photo from the US; driver plows into a bike race in progress.)
After the tragic hit-run near Ottawa which left 5 cyclists badly injured and one still in critical condition plus two other cyclists maimed later that week one of which died, Ottawa Police did the logical thing: crack down on cyclists.

The safety campaign, says Sgt. D’Aoust, is intended to prevent future accidents. The tickets were anything from bicycling on sidewalks, rules of the road such as stop signs, red-light-running, going the wrong way on a one-way street, not having a bell, improper bicycle lighting, or for vehicles, opening the door improperly as well as failing to share the road with cyclists, cutting them off,” the sergeant said.

Most of the tickets went to cyclists, he said, but he didn’t have precise numbers available (bullshit!) Sunday.

The campaign started when police received a lot of complaints of cyclists riding on downtown sidewalks and not following rules of the road. But we targeted both cyclists and vehicles. In fact, I was almost hit by a (car) door opening on Tuesday. He gave the driver a ticket for that one."

Translation: Cops and society have no clue what to do about those pesky cyclists dying so let's make all of us feel better by blaming the victim. In a nutshell, you ride a bike and some drunk or distracted driver smacks into you, well, serves you right for riding on the road. And a targeted Police campaign ain't gonna change that especially one aimed at cyclists. Cyclists aren't the problem. Our car-centric society is.

Toronto Police have been trying for years to no effect.

Can't believe they did that. Especially right after that man ran down all those cyclists - all of whom were following the law and in a bike lane.

I guess if the Ottawa/Toronto police can force every cyclist back into a car then the problem will be solved!

The photo is actually from a bike accident in Mexico.