Ghost Bike Placed at the Bottom of Colborne Lodge and Lakeshore 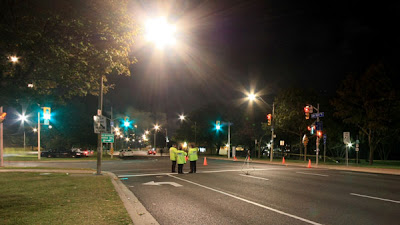 A cyclist was killed Sunday night after being struck by two cars.

Police say the male cyclist in his 40s was travelling south on Colborne Lodge Dr. and was trying to cross Lake Shore Blvd. W. when he was hit.

He was struck by a car travelling east, and the force of the impact threw him into another lane, where he was hit by a second car.

The man was pronounced dead at the scene.

The Bike was placed today and will be in the island where he was lost. His friends and fellow cyclists will remember.
Photos here by Jun: http://jnyyz.wordpress.com/2010/10/03/memorial-ride/
Posted by Geoffrey at 10:57 pm

Email ThisBlogThis!Share to TwitterShare to FacebookShare to Pinterest
Labels: memorial

regreat for nor riding with you.
Nuit Blanche killed me.