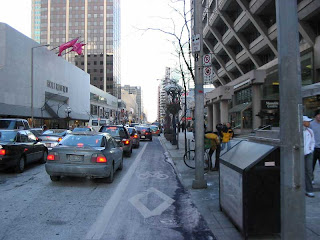 Toronto's cycling enthusiasts celebrated a small victory this week after the province's environmental commissioner released a report criticizing the city over its lack of bike lanes.


The report said that the city didn't have to consult the public because of the way the project was classified.

"It was classified as an 'A' which means there was very little opportunity for public consultation and discussion that some proponents of cycling wanted to see," Miller said after tabling his report in the provincial legislature on Tuesday.

Miller said the classification resulted in the loss of bikes lanes in the area of Bloor, between Church Street and Avenue Road.

He said the province needs to do more to ensure bicycles are taken into consideration when municipalities seek provincial approval.

"There should be a mandatory requirement," said Miller "[that] in future in these kinds of projects that cycling and pedestrians — as legitimate forms of transportation — be included in the consideration and the alternatives in discussion and design."

Eventually the Bloor Street Transformation Project plan ended up in court. The city got what it wanted and cyclists ended up with 'sharrows' — a shared lane with traffic — instead of bicycle-only lanes.

Miller's recommendations are a small victory for Albert Koehl, the lawyer who represented cycling advocacy groups on the Bloor Street project.

"We have now the environmental commissioner pointing the finger at the province and saying you've got to do quite a bit more," he said.

Koehl says the report isn't going to change the situation overnight, but will be a weapon in the bigger battle towards having safe streets for cyclists and pedestrians.
(Photo illustration by Rick Conroy)
Posted by Tino at 9:22 am