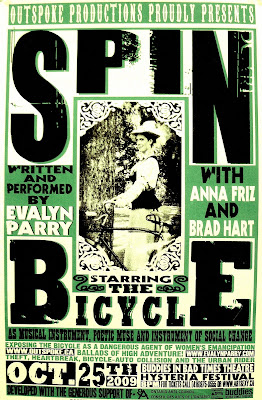 
Written and performed by Evalyn Parry

Using modern effects Pedals and contact Microphones, the players manipulate the acoustic sounds of the Bicycle to make Music

Exposing the Bicycle as a Dangerous Agent of Women’s Emancipation | Ballads of High Adventure! Theft, Heartbreak, Bicycle-Auto Collision and the Urban Rider.

as part of the HYSTERIA Festival | Tickets $10 in advance call by telephone
to reserve at 416-975-8555 or on the world wide web at www.artsexy.ca