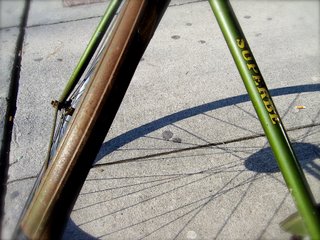 Paris to roll out free bicycles
Tue Jan 30/07 - The City of Light wants to soon become a city of bicycles. Paris City Hall announced it has selected French outdoor ad firm JCDecaux SA to operate a new free bicycle service in the capital. Joining other European cities like the Dutch capital, Amsterdam, Paris wants to make thousands of bikes available for free to commuters, strollers and tourists — in part to help cut down on pollution. JCDecaux's Somupi unit is to have some 14,100 bikes deployed in the capital by this summer. City Hall's choice of contractor was announced Monday. The company was chosen over a consortium of rivals including U.S.-based Clear Channel Outdoor Holdings Inc., and several major French companies. (Thanks to Tovi for the new tip)

Hello Yello! -- If I don't see our yellow bikes on the streets of Toronto come spring I will cry.
Posted by Tino at 9:01 pm