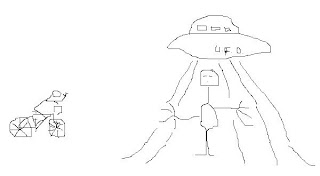 For quite some time BLD staff have suspected that the real Tino was abducted several months ago, a suspicion that was raised with multiple sightings of Tino at the same time in different areas. We posted photographic evidence at the time only to have it refuted.

Suspicions were raised again when Tino announced he was leaving BLD. Staff contacted a retired member of the US Air Force's Project Blue Book. Acting on his advice we had Tino followed by an intern. The intern returned in state of total fright, before passing away he left us with this sketch confirming our worst fears.

In hindsight we realized we missed a significant fact. Tino's riding had gotten real slow at the same time our suspicions were raised, he was routinely being passed by the Ladies' Auxiliary Riding Club on his commute. It should have been obvious to us, the impostor never wore Birkenstocks when riding his road bike. Tino without Birkenstocks is like a wheel without a tire.

Gotta run. There are some nice men in black at reception asking us to sign our organ donor cards.
Posted by Darren at 7:22 pm

I had Tinoo up north at my mushroom patch