Another Idea: Give Every Cyclists Gets Five bucks! 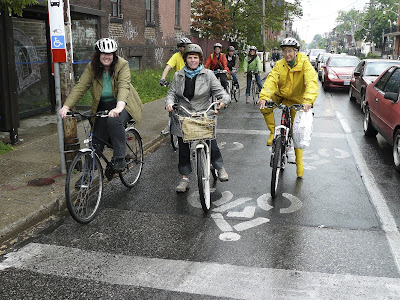 Peter Kuitenbrouwer (National Post)
"The television sets of reporters in the City Hall Press Gallery yesterday were all tuned to a grim spectacle going on in Committee Room 1: councillor upon councillor going mano a mano with Yvonne Bambrick of the Toronto Cyclists Union. They called cyclists every name in the book while debating two resolutions by Councillor Michael Walker to regulate and control cyclists: one to force them to wear helmets (an idea that is laughable in the cycling-friendly countries of the world) and one to license them.

The tone of the proceeding mystified me. Why do councillors want to attack cyclists? Cyclists don't pollute, and they save our health care system millions by remaining fit and healthy. They take up perhaps a tenth the space of a motorist, meaning the more cyclists there are, the less gridlock on our streets. The motorists who remain have more space and more parking. Bikes don't wear out roads or bridges or make potholes bigger. When cyclists run into pedestrians, they don't pose a fraction of the threat of an automobile hitting someone.

I have a better idea for a city program. I think the city should hire people to stand on College Street or Harbord Street, or Dundas Street East -- routes crowded with thousands of cycling commuters -- and, as the cyclists wait at a red light, hand each of them a $5 bill."

Note: ARC did this for Bike Week back in 2001 although we had to limit ourselves to a loonie and a thank you card. Now, that's what I call respect!
Posted by Tino at 12:25 pm