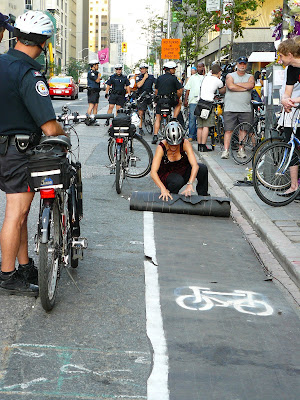 The City of Toronto and Mayor Miller have remained silent about Al Sheppard's death and the daily carnage on Bloor Street.

They prefer to have 30,000 cars a day along Bloor in Yorkville choke the lungs and endanger the lives of cyclists rather than do the right thing. Shame.

Toronto, the city that hates bicycles. They just don't get it.
Posted by Tino at 7:52 am

The facts are that the guy was an angry drunk, probably still steaming and looking for ANOTHER fight.

It hasn't been proven that the driver initiated the incident that got the biker enraged.

What is known is that the guy could have acted like a civilized member of society, and not engaged in a physical altercation. No one forced him to grab on to the vehicle, and his stupidity cost him his life.

The cycling community owes Bryant an apology for his inconvenience.

"It hasn't been proven that the driver initiated the incident that got the biker enraged."

Nor has it been disproven. Probably best to leave our judgements until the facts come out.

First off, I think you need to use your real name here if you want to
comment. My two cents.

I don't think the cycling community owes Bryant an apology ... quite the opposite.

Hey Anonymous,
are you anonymous because you work for bryants pr firm?

Did anyone see the star article about Bryants "enchanted evening" that happened right before it was interrupted by darcy allan shepard?

The PR and spin going on is unbelievable.

Thank you for you comment John Park.
I was wondering the same thing.