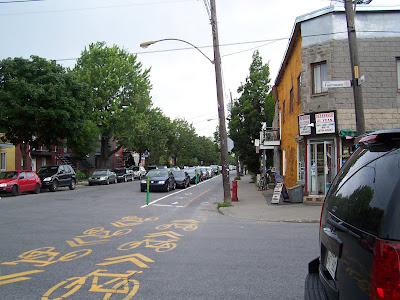 Photo: One of several separated bike lanes in Montreal

Montreal (CP)
After a week that saw several cyclists on Toronto's mean streets badly injured and two cyclists killed, the Province of Quebec has granted asylum to several cyclists from Toronto. They were welcomed by Velo Quebec officials at the Gare Centrale in Montreal and enjoyed a peaceful ride along the new separated bike lane on Maisonneuve in downtown Montreal.

They were later joined by Montreal cyclists for a reception with local beers and fine Quebecois cheese.
Posted by Tino at 10:22 pm

nice gesture from Quebec, more than we can expect in our own city these days. We could learn alot from Quebec's cycling infrastructure. I disucssed my personal experiences and close calls on the streets of Toronto in my latest post at www.notacyclingblog.com.

I realize there are a lot of different variables in play here but I have to say I really enjoyed the 6 months I was a bike commuter in Quebec City last year. Biggest thing I noticed? While there was infrastructure (seasonal only, though - May through October maintenance), the most pleasant difference was that I did not *once* meet an angry driver. Sure, I ran in to the usual inattentive ones talking on cell phones and whatnot but in 3000-5000 km cycled, I did not meet with any hostility. I'd say here in Toronto I see hostility every 200-300 km if I had to guess.

"Data from Canada suggests that provinces that have invested the most in cycling tend to have the highest rates of cycling and also the lowest rates cycling mortality
Quebec has invested more than any other province on cycling (5). For the period 1987 to 2000, the total number of bicycles in Quebec more than doubled, and the number of regular cyclists increased by 50%, while cycling fatalities fell by 42%, serious injuries fell by 56%, and minor injuries fell by 38% (5)."

Evidence you can use in your case for asylum in Quebec

I traveled from Toronto to Quebec City a few weeks ago and as soon as we crossed the Quebec border the separated bike lanes amazed me like an alien space ship sighting. It was so great traveling on bikes to Quebec City... Most people there - both cyclist and drivers -are more careful and considarate.
I suggest we start a petition to the Ontario government to take action to facilitate and enhance (a lot) cycling lanes across the province.