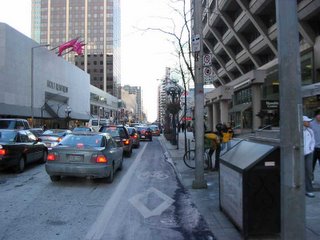 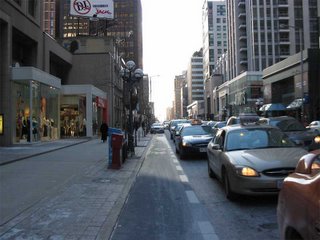 "Bloor Street is safe for cyclists." (Gary Welsh, 2008)
Quote comes from a meeting with Gary Welsh, The General Manager of Transportation Services, City of Toronto when I met with him as a member of the Safe Cycling Coalition which went on to sue the city over its failure to include a bike lane in its redesign of Bloor Street.
Safe, eh? I wonder. But I think we all know that it is not so.
Google News Search Link

Updates 7:30AM (CP24)
Sgt.Tim Burrows was just interviewed on CP-24. According to him:
- no one has yet been charged
- much of the incident is on surveillance video.
- the suspect is comfortable!!! And waiting for his lawyer to arrive.
Updates 8:00
The driver may have been Former Ontario attorney general Michael Bryant. He has been arrested. Charges pending Police investigation. 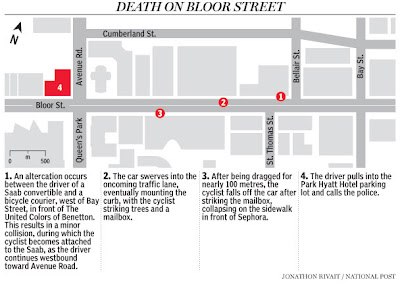 Witness report (via Globe Article)
"The guy hanging on to the car hit the mailbox, hit the road, and the car ran over him with the back tires. The guy bounced, and the car sped off and the person that he ran over was there just bleeding," witness Manual Machado told CTV."
(Graphic by National Post)
Posted by Tino at 8:00 am

If that guy is ever granted a driving license again, the system has failed.

Get worse. Driver was apparently drunk and is a high ranking official. Stay tuned.

I will be laying flowers for the fallen cyclist at 1:15PM today.

First he was a dog killer, now he's killing humans. LOCK HIM UP!