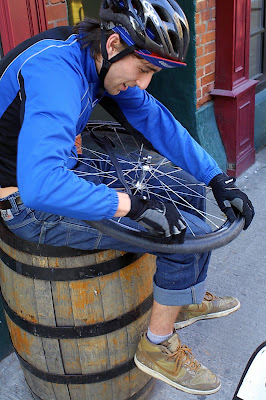 Charlie was a local fixed gear rider and simply a wonderful person. Happy and friendly. Always. I knew him from riding with him in Toronto during Critical mass rides and his many comments on this blog. But I will always remember him for always being a smiling face in a sea of noise and pollution. I will miss you, Charlie!

He was heading back to Toronto more than half way through his epic ride from San Diego to Vancouver and was hit from behind near Brooks, Alberta.
His brother writes:
"Charlie had completed his southerly ride from Vancouver to San Diego and then started his second leg from Vancouver to Toronto, a ride of many thousands of kilometers. Charlie equipped himself to work towards a greener planet and after completing his studies his plans were to continue his studies in France and later in Urban Planning at the Sorbonne and to dedicate his significant talents to a better world. He would never waver from what he believed in and would always fight for his ideals, never passive when he expressed his thoughts and always intuitive. He fought always for these beliefs and spurred on his friends, and in fact everybody, to follow suit, never without enthusiasm, honesty and above all, passion."
(Read on in the comments) (Photo by Wes) You can read about his great ride here.
Posted by Tino at 4:51 pm

We are devastated to tell all Charlie’s friends and biking companions that on Saturday 4th August 2007, outside Brooks, Alberta., my brother Charles was hit from behind by a vehicle that as far as we know swerved onto the hard shoulder. Charlie died instantly. Investigations and the accident reconstruction are ongoing and will be made known shortly by the RCMP.

Charlie equipped himself to work towards a greener planet and after completing his studies his plans were to continue his studies in France and later in Urban Planning at the Sorbonne and to dedicate his significant talents to a better world.

He would never waver from what he believed in and would always fight for his ideals, never passive when he expressed his thoughts and always intuitive. He fought always for these beliefs and spurred on his friends, and in fact everybody, to follow suit, never without enthusiasm, honesty and above all, passion.

Please please share your stories about your time on line or else where with this wonderful, enthusiastic and adventurous to manifest the joy that he brought to all who knew and rode with him. This can be done in the comment section here.

The funeral is to be held at St Paul’s Church, Bloor St. E. at Church St. at 2pm Tuesday August 14th.

The grief we share is the price we must all pay for the deep love we had for Charlie. His memory will endure.

His mother Caroline, father Val and his brother Thoby.

This from his Blog:

Charlie loved critical mass. And was there almost every month. A bunch of his friends etc. think that it would be a great idea to do a critical mass-type taking over of the streets in charlie's honor.

The plan is to meet in front of jet fuel coffee shop (in cabbage town) at 6pm on the 17th of August. The more people that could come out the better. I.e. tell anyone who you think might be interested! the more the better. Also if anyone wants to take it upon themselves to better publicize the ride among people who like bikes that would be great!

Will do, thank you Cam!

Hey Martino.. here's an image I cooked up for the memorial ride.

How sad. My thoughts are with you guys and his family.

You will be missed Charlie

That was a great photo - I remember it was taken on the esplanade just outside of that bar. Jeremey (darkmother) was there, and someone else maybe Wes.

What an inspirational life Charlie led! He was a great rider AND a great writer!

Charlie and his family are in our thoughts and prayers.

I just heard the interview on CBC Radio via streaming audio down here in Washington, DC, where, as a daily bike commuter, I can report we also have our fair share of conflicts between cyclists and motorists. The interview, and the portrait painted of Charlie Prinsep really touched me. I'm so sorry about this loss, and, though I can't be there in person, I'll be virtually riding with you on the ride in his memory.

Thank you very much, Chris. Nice to know you'll be riding with us.

I caught only the tail end of the CBC interview about him today, but enough to catch the website which has now led me here.

his journey and blog astound me. i have so much respect for go-getters like Charlie. I too am a fellow cyclist, who endures a daily commute to work via bicycle in mostly the downtown core of the city, and i know how horrendous it can be to safetly make your way around, all while maintaining a sort of safe aggression in not letting vehicles completely run the road.

I am very sorry to the family and only my warmest wishes go out to everyone who knew him personally. His legend will live on in all who have the same love for cycling and travel.

I found out about Charlie through random googling- a friend is planning a trip similar to the one Charlie completed, and I wanted to show her blogs that would encourage and inspire her. Charlie has done that for me- what a great loss.